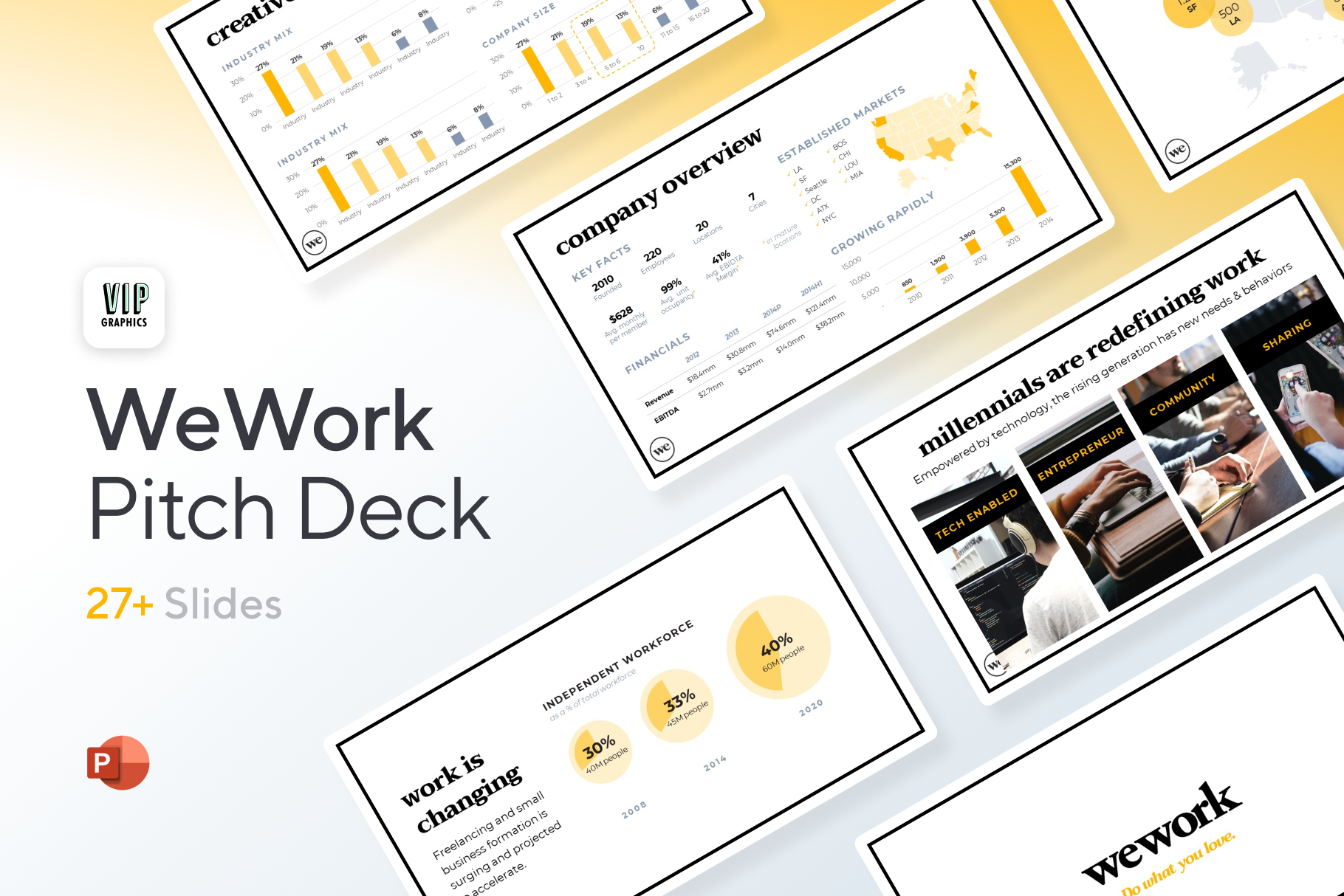 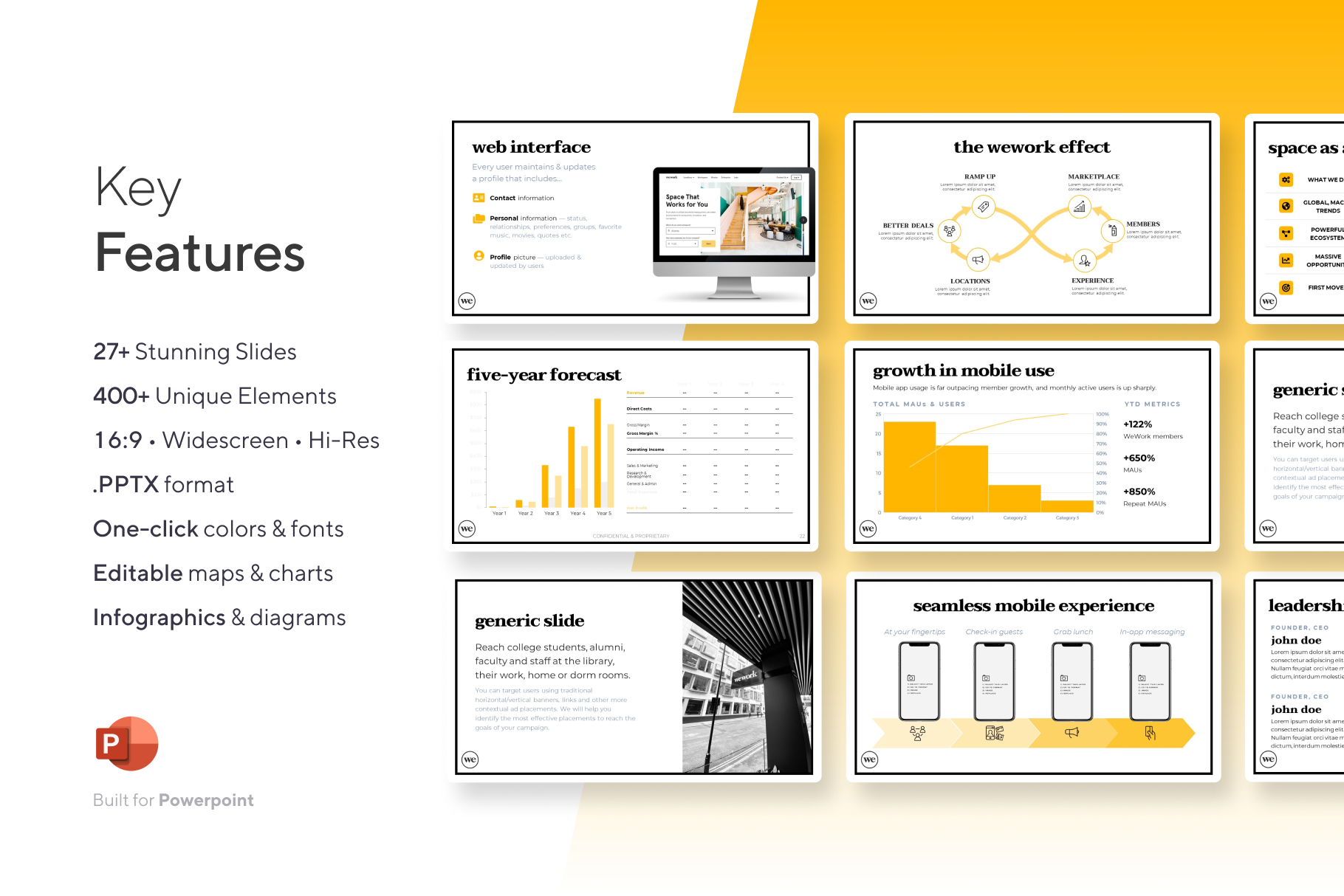 Build the perfect presentation for any purpose.

Get it done faster (and cheaper): effortlessly build your winning presentation with this trusted pitch deck template.

All elements are fully-editable with PowerPoint (.pptx) or Keynote (.key) – no special experience or plugins required.

Closed by our slides 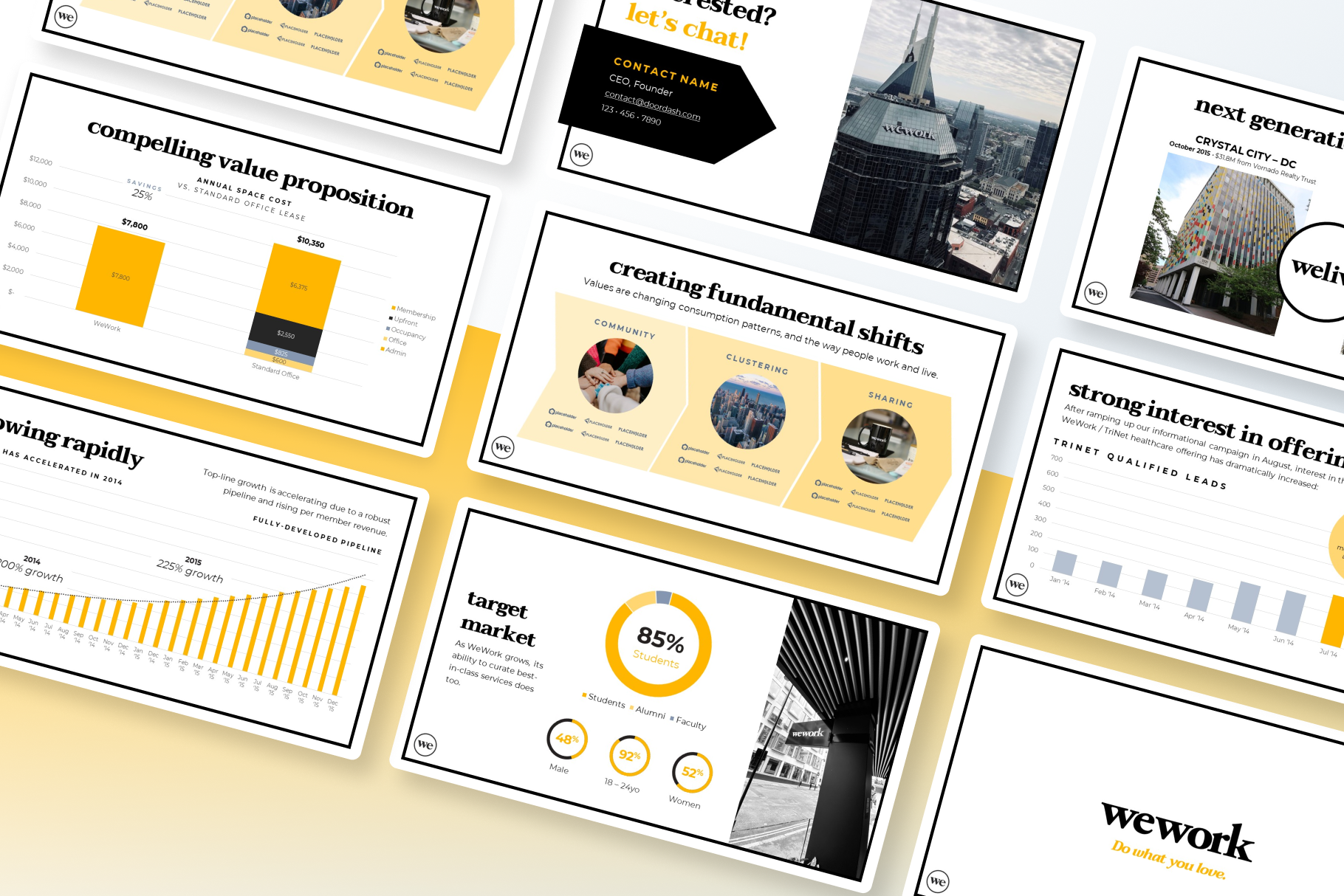 Nail your next pitch presentation

The rise (and fall) of WeWork has become an indelible part of venture capital lore: founded in 2010, the company rapidly expanded to 800+ locations, 15,000 employees, and over half a million members. WeWork raised billions in funding, reaching an astronomical $10B valuation — before imploding pre-IPO due to questionable financials.

Nevertheless, founders can learn valuable lessons from the early example of WeWork: in particular, the company released a copy of the 2014 pitch deck which helped them close a $355M Series D round (at a $5B valuation) in funding from leading investors like Goldman Sachs, JP Morgan Chase, Benchmark Capital & Harvard Management. We’ve redesigned the original pitch deck as a modern PowerPoint template, but you can find the original version here.

This adapted version of the WeWork Pitch Deck template was crafted for founders seeking to win late-stage funding from venture capital firms and financial institutions. Our team of experts added a professional design touch to the Facebook pitch deck, while preserving their approach and style guide.

Our team of experts has designed award-winning pitches for nearly a decade and understand what it’s like to be in your shoes: we’ve not only designed pitches that won the likes of 1000Pitches & MLH contests, but also created slides for prestigious accelerators like Y-Combinator, 500Startups, and TechStars and even Thiel Fellows and Forbes 30u30 alums.

This template was crafted to give you the tools to nail your next presentation, based on WeWork’s tested formula that raised an estimated $21.6B+ in funding. This deck provides powerful slides proven to win, based on pitches that closed over $100M+ in deals & investments. Get this versatile & affordable template and you’ll be ready to go—just edit and toast your success!

Our completely editable and flexible layout is quick and easy-to-use: just add your content, drag-n-drop photos, and change color/fonts with a few clicks as desired. These slides & templates were designed to help startups create high-quality and impactful pitch decks that accelerate the fundraising or sales process.

This template has everything you need to pitch the likes of venture capital firms and investment banks with confidence.

Based on decks that closed millions.

Our team works with hundreds of cutting-edge organizations ever year — from publicly-traded and Fortune 500 corporations to high-growth startups and VC firms, across industries & around the world.
This model is designed for highest ease-of-use: its automated, end-to-end formulas guarantee your updates automagically flow through to all ~15 sheets, so you don’t have to worry about constantly updating cells manually.

How do I know this is right for me?

With this all-in-1 presentation template, you’ll be able to craft a stunning and convincing overview of your business and/or opportunity. Leverage infographics, diagrams, and charts to effectively present your business plan to investors & prospects. This pitch deck template was crafted in PowerPoint by expert consultants based on 100+ winning decks that closed over $100M+.

Do I need any specific knowledge or skills to use this?

You don’t have to be an expert or a design to create a stunning pitch with this versatile presentation template. Our pitch deck kit makes it easy for even the most novice presenter to impress.

Just add your content and images and our sophisticated pitch deck will do all the work, providing an engaging overview of your company’s traction, predictions the for future, and an action plan for growth.

How do I use this template?

All of our templates are editable with PowerPoint or Keynote. We focused on making it simple to use and customize. This presentation is designed for the highest ease-of-editing, with 1-click themes in PowerPoint so you can easily apply your branding to all the slides. Just add your content, drag-n-drop photos, and change color/fonts with a few clicks as desired, and you’ll be ready to present!

What software do I need?

All of our templates are editable with PowerPoint or Keynote. We focused on making it simple to use and customize.

Do you help with financial modeling?

Yes, certainly! Our team has helped create pitch decks & financial models that have closed over $100M in deals & investments for companies ranging from Fortune 100 corporations to Y Combinator startups.

Check out our top-rated financial model templates here, or feel free to reach out to us via email or Behance if you’re looking for custom services.

How can I purchase this?

Click on the “Download Now” or “I want this” buttons anywhere on this page, or just click here! You will then be able to purchase the asset via our payment partner, Gumroad, where you will be able to enter your billing and payment information. We accept all major international debit and credit cards such as Visa, Mastercard or Paypal.

Can I get a refund?

Unfortunately, we are unable to offer refunds: all sales are final – these files are instantly available digital downloads and cannot be returned. Please feel free to contact us with any questions; thank you!

Anybody can create a stunning & professional pitch deck in a matter of minutes with out expert-designed presentation templates.

Build your perfect presentation in minutes

We want to help you build your winning deck, which is why we’ve made our templates affordable for everyone.
Click here to save 35% on this template!

Limited to only one commercial project.

Editable PPT
Commercial use (1×)
No re-sale or distribution

Unlimited commercial projects, but no re-sale or distribution.

Editable PPT
Commercial use (∞)
No re-sale or distribution 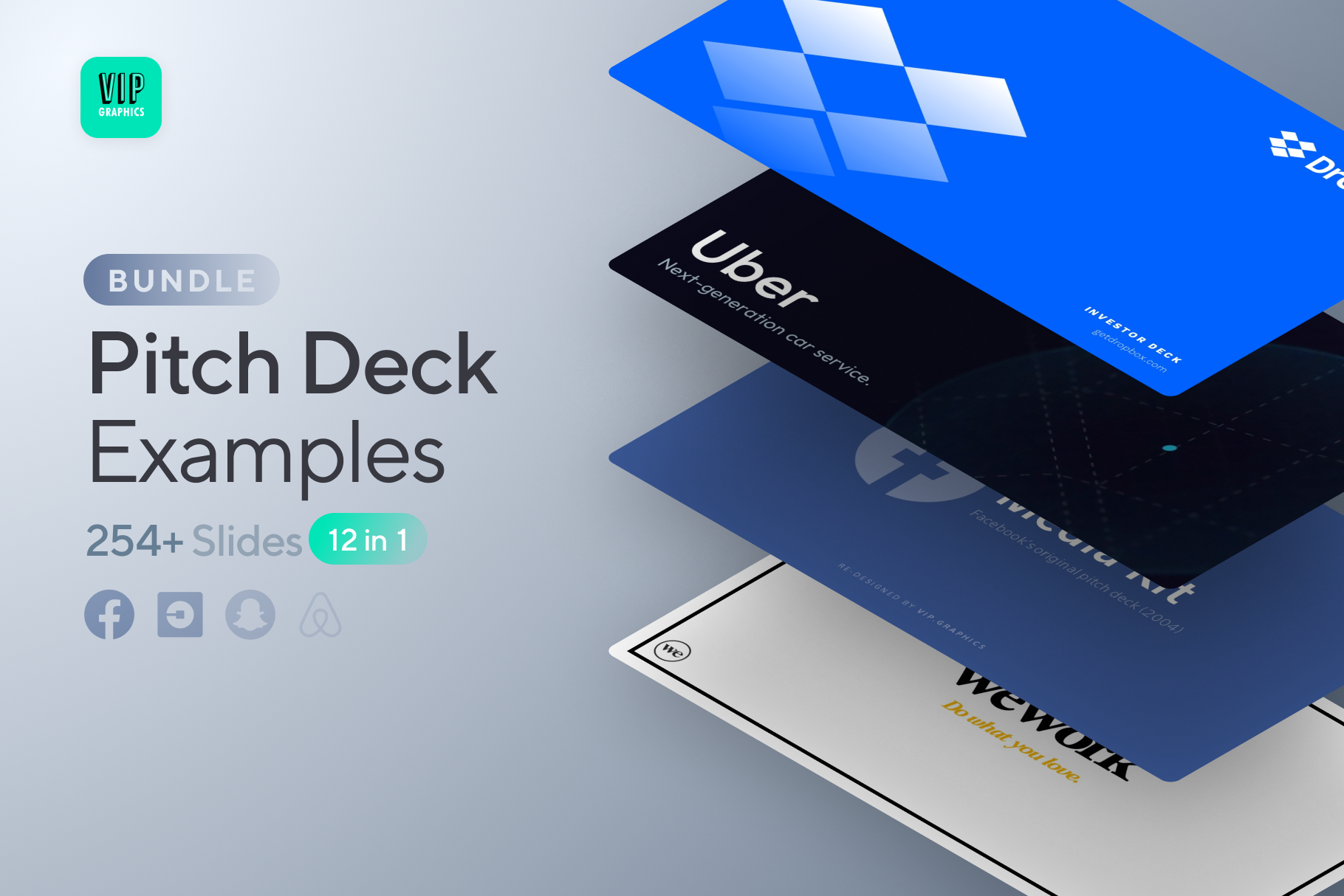 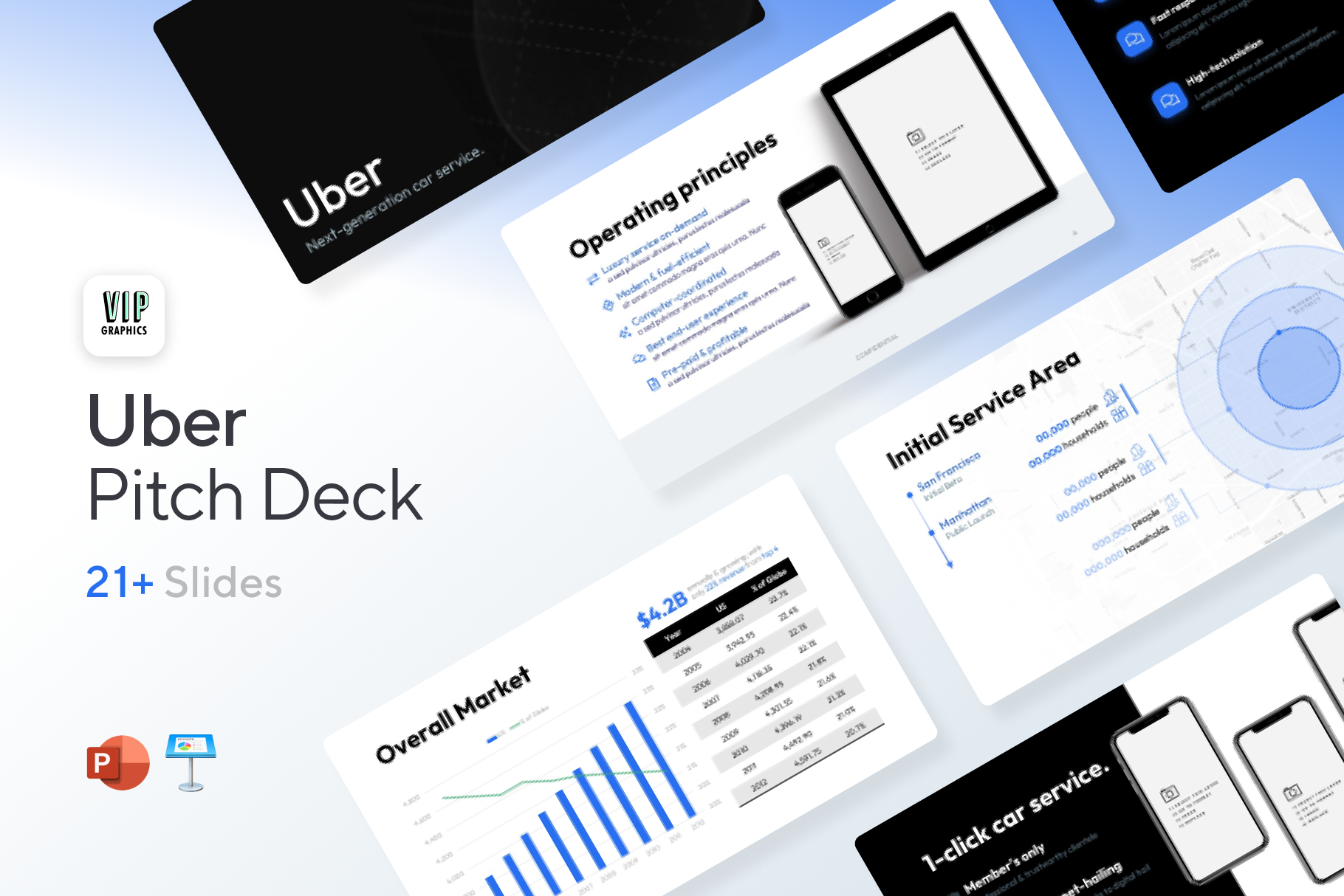 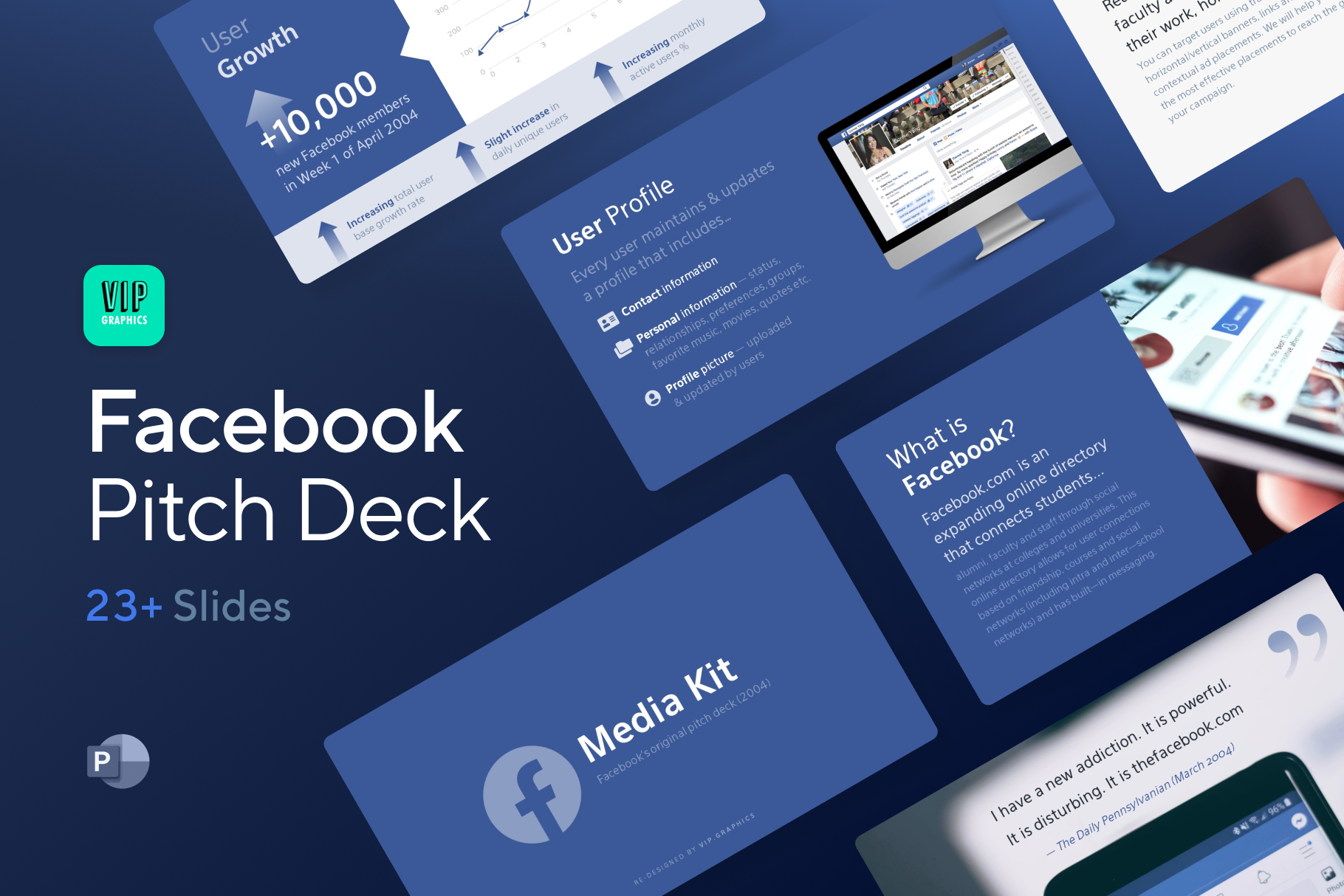 Based on Facebook's 2004 media kit for pitching their platform